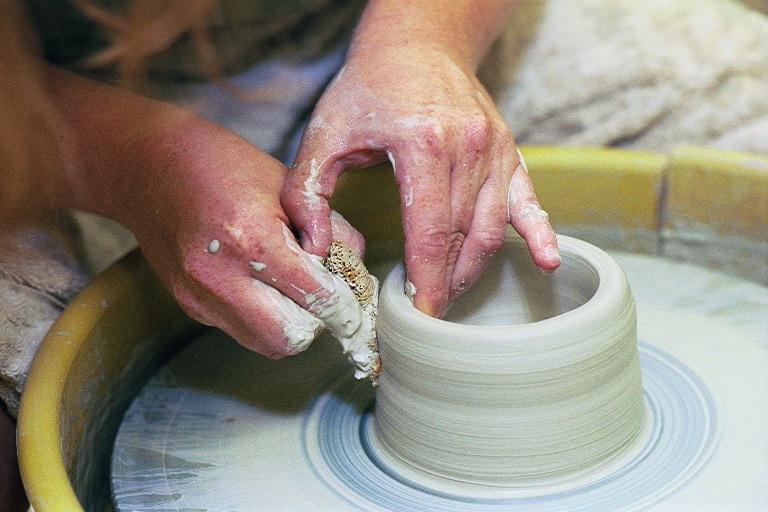 In the New Testament letter we call 2nd Corinthians Paul is writing of how the God whose glory is seen in the face of Christ has made his glory shine in us. Paul considers this good news a treasure, and so Paul writes a few lines that have become famous:

But we have this treasure in jars of clay to show that this all-surpassing power is from God and not from us. We are hard pressed on every side but not crushed; perplexed, but not in despair; persecuted, but not abandoned; struck down, but not destroyed.

Jars of clay are easily cracked. This is a fragile world, and we are fragile creatures – a fact we often deny but cannot ultimately avoid.

When Reese was very young (and I was very new to daddy-ing), I remember how deeply thankful and physically relieved I felt when I saw Reese could support her head and move it around competently.

Knowing that her large head wouldn’t snap her skinny neck made her seem a little less fragile to me. For my part, I felt a little less able to break her by accident.

Both a newborn’s body and a first time father’s psyche are clay jars.

Years have passed since then. And, although Reese is still only a little over four feet tall (almost five feet with hair) and just a feather’s weight over fifty pounds, I don’t see her as physically fragile nowadays. She’s tough.

As Reese has aged what seemed most fragile about her became her moods. Reese could go (and still can go) from complimenting my shoes to making fun of my hair and pointing out my pimples in less than ten seconds. Or so it seems.

Or this: a few years ago Reese became very interested for a time in the cartoon My Little Pony. Most of the characters are candy-colored horses of various sorts. Each pony bears on the side of his or her rear end something called a “cutie mark”. The cutie mark is a symbol that represents that pony’s main characteristic, skill, or gift.

One moment Reese would be so confident – almost joyful – as she marveled at all the things that could become her cutie mark. The future seemed so open and full of possibility.

But then a switch would flip, and Reese would become deeply worried because she didn’t yet know what her cutie mark was. She feared she had no great skill to hold up to the world as valuable, no gift of heart or mind to hold out with pride.

Her self-confidence and her sense of self were clay jars easily fractured. To be honest, most adults I know (myself included) often seem like that as well, even if we do a better job hiding it most days. We are all clay jars.

A few years back I read a wonderful little book called A Quiet World: Living with Hearing Loss by David G. Myers. Myers was a successful professor of psychology who chronicled his experience of becoming hard of hearing.

He describes the fragile process of hearing which depends on miniscule hair cells in the ear’s cochlea that wave like wheat under the power of sound waves. Damage these fragile cells and we lose our glorious hearing. We are clay jars.

Myers tells of a woman, a Christian, who got progressively more and more enraged because her preacher repeatedly asked the congregation during worship, “How many of you have sex?”

Eventually the woman’s husband told her the pastor’s question actually had been, “How many of you write checks?” She’d heard wrong. Her clay jar ears were badly cracked. We are all clay jars in so many ways.

We are not made of steel, and we waste too much energy trying to convince the world otherwise. Jesus got tired and hungry. He felt alone and even sensed the icy void of death. He was a clay jar too.

As Jesus’ people may we show this new creation making grace not only through our supposed strength, but also through the vulnerable, fragile clay we share with the one we call Savior and Lord.

In all ways, strong and weak alike, may the good news of Jesus pour through our clay jars.

No, dad, it’s not rude you told this about me.

I picture it like a child carrying a piece of glass. You watch the child with the glass wondering, “Will he run? Trip? Is he going to grab a rock and break the glass? Should I take the glass away from him? Can I?”

Sometimes you or me or whoever is the glass. Somebody’s carrying us, and they trip, they fall, they throw a rock, and we break. Fragile.

Sometimes we’re the kid carrying the glass that is another other person. And we drop them. Fragile.

And it’s not just the glass that’s fragile. The child is fragile too.

Life is fragile. I don’t think the body is as easily ruptured as the emotions. A word can knock us to the ground and break a friendship. A knock on our body can break a bone, but a knock on our spirit can break a lot more.

We try to look tough but aren’t.

But, you know, inside we tell ourselves lies that can make us believe things are more fragile than they actually are.  And, if we believe the lies, then solving problems is harder because we think things are too fragile and so there’s no use trying to fix them. That’s the lie.

The way we can be strong in a good way, the way we can fall or get hit with rocks and not break is to have a big purpose, even if what that purpose makes us do looks small in the eyes of the world.

I see Jesus as human and not human. He’s fragile.

I remember him getting mad at the sellers in the Temple, and so I see he’s emotional. The Temple was important to him. Seeing it like that was like getting cracked by a rock.

I also remember Jesus in the garden praying before he got arrested. He seemed scared. Another rock hitting him.

But he was also strong, faithful. Purpose. I remember this when he resisted the devil in the desert.

Both fragile and strong. Jesus.

Dad, looking at old pictures of me as a baby, I know I had a large head. So, it’s not strange for you to say what you did about my head and neck. But, I didn’t know back then I had a large head. If I’d known, I’d probably have been worried about it. Ha.

But now my neck is quite strong. My head fits on it quite well.

A lot of my clay jar cracks have had to do with worries. Like this: as a little kid I learned a lot about sickness and germs. Worry habits with this stuff were like rocks hitting my glass.

But I’m a lot better now. The cracks are a lot smaller now. If the neural pathways for my worry were really big before, now they’re more like tiny strings.