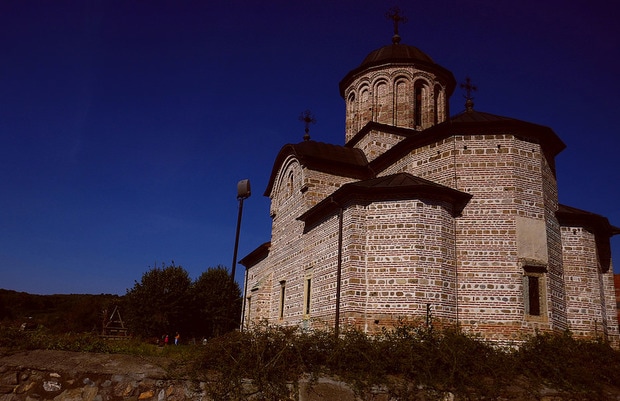 In the under-populated plains stretching across central Kansas there is a community of monks. The main building on the monastery’s campus ruptures skyward from the flat earth like a mountain. And in the heart of that limestone peak is The Chapel of the Mosaic.

The Chapel is a simple place full of clean lines and wooden accents. On its massive altar table sits not only the equipment necessary to celebrate the Body and the Blood, but also a large block of stone which would crush a lesser table.

The sides of the stone block are rough and torn. It is clear the block was wrenched from a wall with great haste. The front of the stone is covered in small, colored tiles whose arrangement depicts Christ at prayer.

The scene is well-known. Christ kneels in Gethsemane moments before the kiss that sent him to his doom. His hands are clasped and his face pitched upward. As far as artistic craft and emotional impact are concerned, it is a middling piece of art.

Ten feet in front of the Stone two members of the Order replicate Christ’s posture and purpose. The brothers wear robes that almost touch their feet and hoods that hide their faces.

They kneel on the bare floor and turn their faces up toward the image of Christ. They stare at the stone and radiate intensity like blacktop roads ripple August heat. They make no sound. Even their bowels obey the silence and do not groan.

There are just two other people in the Chapel. An old monk named Brother Andrew is giving a tour to a young man named William. William is thirty years of age and planning on joining the community, if they will have him.

Brother Andrew cannot help but notice William’s left ring finger because it bares a deformity, the indentation left when a long-worn ring is removed. Brother Andrew chooses not to comment on this.

“Our Chapel of the Mosaic is almost always quiet, as you might expect,” says Brother Andrew in a whisper, even though they stand sixty feet from the meditating monks. “There are always at least two brothers keeping silent vigil before The Mosaic Stone. We work on three hour shifts. Eight shifts a day – everyday – are shared in rotation by all the brothers. But, believe it or not, this place can be quite a barrel of buzz on Sundays when we have ‘open’ mass. All the brothers are here, of course. But there are also people from the town. And even some pilgrims. It can be quite a time.”

William nods. “Tell me more about the Stone, Brother Andrew – if that would be all right.”

“No trouble at all. The Stone comes from a church near Schoenenbourg, France. The mosaic was created around 1658 and became a highlight of the east wall of a rather ordinary church building overseen by a community of our French brothers.

“When the Nazis overran the Maginot Line in 1940, the Mosaic Stone was ripped from the wall and smuggled to the States. In thanks for caring for it during such a time of travail, we were given the Stone in 1987. But it’s really more like a loan, I suppose. The French withhold the right to repossess it, if the Lord ever tells them to do so.” Brother Andrew releases a small laugh which fits poorly with the whisper he uses to tell the tale.

“Brother, why is the Stone so important – other than being a rendering of the incarnate Lord?”

“Surely, you have heard the stories, William.”

“Some. But I’d rather hear the stories from you.”

“Very well. During the last years of the 18th century, the Stone spoke. Rather, the Lord spoke through it to the brothers. It’s a holy relic of the first order. However, since then there has been nothing. Only silence.”

Brother Andrew pauses before finishing his thought. “But we continue to listen. We continue to contemplate. We continue to open our presence to the Lord through the Stone and pray he chooses to do the same. We empty our minds, tune the ears of our spirits, and trust the Stone will speak again.”

William nods. The two men move on to the refectory for tea. Two years to the day, William joins the order and is given the name Brother Samuel. When asked about the mark on his ring finger and all it represents, he tells the brothers that Death came to his home and did its cruel work.

His name is unintentionally prescient. Five years after William takes his vows the Mosaic Stone begins to speak to him.

Through the years all the monks who partner with Brother Samuel at silent vigil describe the Stone speaking to him with almost the same words.

When the Lord comes to call, Brother Samuel rises from his knees slowly. Once up, he takes a quick, massive, violent inhalation of breath. It sounds like he is a drowning man emerging from underwater. It is like the reaction one has to a sudden, slicing pain.

Then Brother Samuel touches his chest delicately and with all ten of his fingertips. He touches his chest in the manner a pianist might employ to place her fingers with great ceremony upon the keys before commencing a recital.

After this, Brother Samuel cocks his head to the left and turns his right ear toward the Stone. Next – sometimes for thirty seconds, other times for thirty minutes – Samuel becomes the recipient of a secret. He nods periodically, as we would expect anyone receiving secrets to do.

Finally – and without warning – it is over. Brother Samuel collapses to the stone floor in a heap and sleeps. He sleeps so deeply that the Devil dancing on his chest could not wake him before he is ready to rise. When he does rise, Brother Samuel always has a word of knowledge.

Another time Brother Samuel awakened and summoned the Abbot. Brother Samuel told him that the source of the grapes the monastic community used to make its jellies and wines paid their pickers slave-wages. There had been nothing in the news, but after the community informed the supplier of its decision, it all came to light.

Then there was the dark night Brother Samuel awoke screaming in anguish, tossing upon his bed, and trying to rip his sheets into strips. He awoke raving about The Flood and how sending the dove was useless because there were no green twigs upon which it could snap its beak. A few moments later the brothers heard that an earthquake had split the underbelly of the Pacific Ocean and birthed a skyscraping wave that had devastated a dozen nations.

For decades his brothers ask Samuel daily to teach them how to coax Christ to speak to them through the Stone. And daily Brother Samuel is patient in saying the same thing to his questioners, “I am not yet allowed teach you such things.”

During those decades Brother Samuel’s health is as reliable as a metronome. On the fiftieth anniversary of his vows, and while his brothers set the table for a feast to celebrate the occasion, Brother Samuel dies. He dies having taught no one the secrets of the Stone.

As is their strange custom, the brothers cast lots to determine who will strip Brother Samuel’s body, scrub it, and pray a sleepless night’s vigil beside it. The task falls to Brother Abraham, a younger monk known for his sense of humor. Before entering the order four years earlier, Brother Abraham wanted to be a professional stand-up comedian. He is teased about this. He is told that God did not purge him of this desire, but instead transfigured it into his preaching style.

But Brother Abraham has no humor and no homily when the lot falls to him. He has only shock and sadness. As tradition dictates, that night Abraham takes Brother Samuel’s body into his own room to sit vigil beside it and pray for Samuel’s soul.

When the body is stripped, Brother Abraham inhales his breath so violently it’s as if he might be receiving a word from the Stone in the same manner Brother Samuel long did. He is not. Brother Abraham’s revelation comes not through mosaic tiles, but through scarred flesh.

Upon Brother Samuel’s dead, sunken, bare chest is a photograph. It’s small, perhaps two inches square. The photo is laminated and very old. It’s a spontaneous, amateur portrait of a young woman. From the veil resting atop her head it’s obvious she wears a wedding dress.

The bride has black hair and large breasts. She’s very pretty. Despite his vows, Brother Abraham notes she’d be completely gorgeous were it not for an overbroad nose.

It’s a playful picture. The bride’s lips are puckered as she blows a kiss toward the camera. The bride sits in a car, and the driver is the cameraman. Arcing across the top of picture are the words “I Love You Will!!!”

Stuck by masking tape to the very bottom of the picture is a tightly-folded piece of paper. In a daze Brother Abraham pops the paper from the picture and unfolds it. It’s a letter written in Brother Samuel’s own hand.

For years the brothers have asked me how I hear the Lord speaking through the Stone. Now I am allowed to share my secret. Do with my words what you will.

On the day I visited the community for the first time, Brother Andrew (may he rest in peace) told me that the brothers in their vigil listen to the Stone by emptying their minds in contemplation and tuning the ears of their spirits to Christ’s voice.

This is all well and good, and I do it religiously (pun intended) during those long, tired hours of vigil. But I have also learned to listen first through the pain of my heart. I have learned to contemplate the Stone through a heart shattered by all to which I died so I could be here with you and with Him.

The Christ of the Stone, the Christ on his knees in the Garden, also has a heart broken by all he had to leave. And he and I meet in that shattered place, that catastrophied heart, and he speaks, and I listen, and that is all I know to say about how it works.

The rest is a mystery, even to me. But all that we call grace is mystery in the end, is it not, dear Abraham?

Do not follow me in the mortification you see written upon my tortured skin. Follow me in listening through your broken hearts.

Be well, Brother Abraham. Continue to tell your jokes and know that Christ laughs (and usually even when you intend him to).

All to His Glory,
William

To this day, if you visit the monastery you will see the great building jutting skyward from the flat earth. And, of course, you’ll see the Mosaic Stone with its two monks hard at their silent work as they kneel before it.

But you’ll also see something that William did not see when he visited so many years ago. On the robe of each brother you will see a different picture pinned to the chest. It will be a picture of a woman or a man or a child or a family home or a section of a map – something or someone pinned to each breast.

​And each brother you meet will tell you in whispers both secretive and jubilant that the Stone speaks and refuses to be silent.