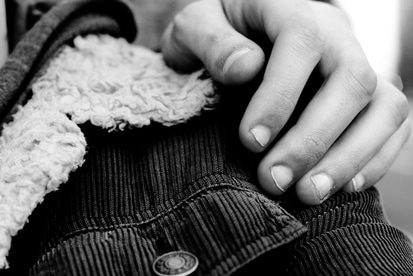 A Reading from Romans 8

And by (the Spirit) we cry, “Abba, Father.”16 The Spirit himself testifies with our spirit that we are God’s children. 17 Now if we are children, then we are heirs—heirs of God and co-heirs with Christ, if indeed we share in his sufferings in order that we may also share in his glory.

My wife Nettie and I were in The Great Smoky Mountains of Tennessee at a restaurant near the small community of Cosby. The place was called the Black Bear Inn.

An elderly man came up to us asking questions – On vacation? From where? What do you do? With my breath I ended up telling him I was a minister in the Christian Church (Disciples of Christ). Under my breath I was saying, “Leave us alone.”

But the old man pulled up a chair, sat down, and said he owed a lot to that type of church.

He said, “I grew up in these mountains. My mother wasn’t married. I was illegitimate and ashamed. Kids said ugly things to me at school. I ate my lunch alone.

“In my early teens I started going to a little congregation back in the mountains, Laurel Springs Christian Church. I was afraid of being there since I was, as they put it, a bastard. I’d sneak in after the worship started and be the first out the door after the last blessing.

“One Sunday a line at the door blocked my escape. As I waited I felt a heavy hand come from behind and rest on my shoulder. I trembled, turned, and saw this great, big, bearded man studying my face. After a moment, I knew he was trying to place me, to tell who my daddy was. I was about to be rejected. I would never return.

“Finally he said to me, ‘Well, boy, you’re a child of…God. I see the resemblance. A striking resemblance.’ The he swatted me on the bottom and said, ‘Now, you go claim your inheritance.’ In a way that was the beginning of my life.”

I was moved by his story, and asked him his name. He said it was Ben Hooper.

Vaguely, deep in the dark recesses of childhood memory, I recalled my own father once saying that the people of Tennessee had twice elected a bastard to be their Governor. A man named Ben Hooper.

Are you adopted? Have you adopted someone else? Do you know anyone who has been adopted? What are your thoughts and feeling about adoption? Do you see it as “a second class birth”?

According to the Matthew and Luke, in a sense Jesus was adopted by Joseph. How does this impact how we see Jesus? Joseph? Adoption?

What does it mean to be adopted into God’s family?

The respected website snopes.com has challenged the accuracy of Craddock’s story above. Does that take away from it? If so – how, how much, and why?