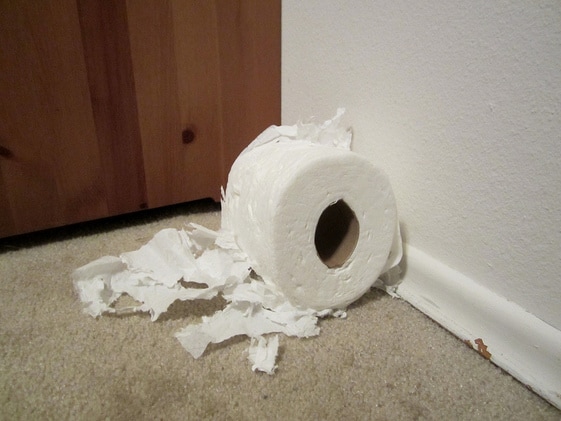 When Reese was first moving from babyhood to toddlerhood one of the things that amazed me was how quickly she got into destroying things.

I vaguely remember one morning when Reese crawled into the bathroom, grabbed an issue of Time Magazine sitting on a rack by the toilet, and shredded it. She ripped it apart. With, I must add, much glee.

As many of you know from experience, this is normal behavior for an infant becoming a toddler. Reese was obviously feeling the growth of her power, the growth of her ability to influence the world according to her will.

In other, more biblical words, Reese was (and still is) experiencing the growth of her kingdom (or, in her case, queendom). Of course, nowadays she is more likely to shred a morning to pieces with an argument over what clothes she wants to wear and whether she has to go to school or not. (To her credit, battles of power like these are very rare.)

I’m fascinated by how, even when she was very young, Reese often recognized when she’d used her power to destroy. I could see it in her eyes. A regret. A sadness about contributing negativity to a situation.

By the time she reached three years of age, sometimes Reese would even police her own destructiveness. Occasionally, after doing something worthy of the guilty verdict and subsequent sentence, Reese would put herself in time out without a parent being involved at all.

But, because she’s a human, Reese still does the destruction now and again. And Reese is a great kid. And Reese is much more inclined to use her power to build up and bless others than I was as a kid her age. But it’s still a little disturbing that it happens.

It’s not just Reese. My guess that’s the way it goes for all of us on some level.

We all have a kingdom (or a queendom). We all are given a sphere of influence in which our will and action has the power to tear down or build up. We all have a zone in which we have the undeniable ability to bless or to curse by what we say, what we do, and who we are.

The question every morning as we wake up into another day is how do we use our power? What will become of our queendom on this particular day? Will what we contribute bring things closer to Heaven or closer to Hell? Closer to life abundant or to death despondent?

It sounds a little odd to put it that way, but I bet you know what I mean.

How do we use our bodies and our words, our time and our sex, our money and our prayers, our energy and our imagination? Do we use power ultimately to build life up or to tear it apart?

For people who follow Jesus, oftentimes such a question brings us to the gospel of John chapter 13. According to John, a few short hours before he is arrested and killed Jesus says this to his disciples:

Context means everything. John chapter 1 described Jesus as being the powerful Word of God through whom the universe was created. In John chapter 13 this same Jesus gets on his hands and knees and scrubs his disciples’ dirty feet. It is also this same chapter 13 where Jesus shares the dark reality that he is being betrayed and abandoned by the very friends he washes clean.

In his potent glory Jesus decides to use his power to serve his friends and build up their lives. In the face of betrayal Jesus uses his power to stand firm in faithfulness to God and to the people God has given him.

And he issues a call to his followers to stay faithful by building up lives through mutual care, instead of tearing lives apart through mutual betrayal. It is this faithfulness in action Jesus declares “love”.

It is this love Jesus requires of his people so that the wider world may see Jesus and know him.

If you are a follower of Jesus, the question is posed like this: How do we use our power – our kingdom – as people wanting to have our lives shaped by Jesus?

It can be well-argued that this is the fundamental question of Christian discipleship.

So, how do we answer it? Not in vague generalities, but in the specifics of lives lived in real homes, offices, and schools. What is one way you can answer the question today?

There are, after all, better things to do with life than sitting beside the toilet shredding magazines.

​I’m seeing Jesus as a rock right now. An analogy. Jesus is a rock. He’s strong. Stands solid. Hard to move. Doesn’t give up his spot easily.

But he will rise up again. To the surface. Worn, but still a stone.

Now that I’m older, I dread things breaking. It scares me. I know I shouldn’t be scared, but I am. I imagine my favorite toys breaking and how bad it would feel if it actually happened.

I used to like knocking things over, like the Gatorade bottles, and I know my room’s not always neat, but I like order a lot more now. I still will destroy things, but it’s usually out of frustration. Like when a craft project I’m working on doesn’t work out.

I guess humans and animals need to know they have power. If they don’t, they’ll eventually get frustrated, and something bad will come out of it. Jesus had power, and he controlled his power well. He didn’t go crazy with it. He didn’t make wars. He created miracles, signs of life.

I think my power now is most felt in making my own decisions. And in trying to tell my parents what to do.

Sometimes I feel some power over my body and mind, power to calm myself and fight disease. I know I feel power when I play alone, like with my dolls, for instance. I use my power to create personalities when I’m playing. I get the option to have characters do different things I want them to do.

With other people, like at school, I use my power to read people’s words and body language. I try to use my power to be kind and have the courage to say something’s wrong when it is, instead of pretending something is OK when it’s really not.

I don’t think power is forcing things on people, making things have to happen. I think power is more asking questions, working with others, making others comfortable. Like asking, “Is this thing we’re thinking about doing something we want to make a power investment in together?”

This is especially true for people who have a lot of power – a lot of money, a lot of intelligence, things like that. It’s not a kind world for people who don’t have much power. Powerful people are called to help with that, but many of them seem to want power over others, not power with them.

Yes, dad. It’s fine you wrote this about me. I didn’t do anything too dumb in it.