Jesus Is Happy in the Nursing Home -- Craddock Story #5 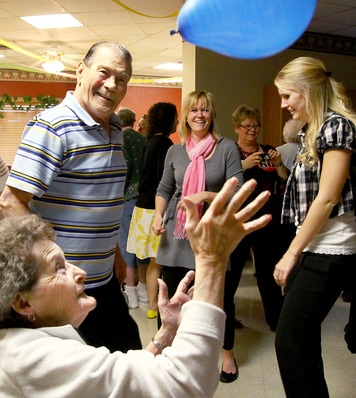 A Reading from Luke 18

9To some who were confident of their own righteousness and looked down on everybody else, Jesus told this parable:

10"Two men went up to the temple to pray, one a Pharisee and the other a tax collector. 11The Pharisee stood up and prayed about himself: 'God, I thank you that I am not like other men—robbers, evildoers, adulterers—or even like this tax collector. 12I fast twice a week and give a tenth of all I get.'

13"But the tax collector stood at a distance. He would not even look up to heaven, but beat his breast and said, 'God, have mercy on me, a sinner.'

15People were also bringing babies to Jesus to have him touch them. When the disciples saw this, they rebuked them.

One of the best sermons I ever heard one of students preach wasn’t even in a church building.

This woman in my class didn’t have a church to serve, so she asked me to come and hear her preach at one of those homes for elderly people. You know, one of those living places where there are three different levels of care. One Sunday afternoon a month she led a service in the sunroom.

I sat down, the service started, and my student read her text. It was from Luke chapter 18, the mothers bringing the babies to Jesus. Jesus saying, “Permit the little children to come to me.”

What?!?! Of all the texts to read! I mean, the average age of the congregation was like 117 years old. Bring the little children?

She said something like, “I still can’t get over the fact that Jesus’ helpers, the twelve apostles, the clergy, said, ‘Get the children out of here.’ In a way, I can understand. After all, they make noise. They have to be cared for. Sometimes you have to get up and leave with them. They eat up everybody else’s time. They usually can’t give much if anything. Can’t teach a class. Can’t sing in the choir. They’re just a burden. But Jesus said, ‘Leave them alone, let them come.’ They’re kingdom people.”


She never mentioned the elderly, and they perceived. Marvelous.

Are people ultimately called to be dependent, independent, or interdependent?

Is there anyone who isn’t a burden on others in some shape or form?

Can you remember a time you cared for someone in their weakness? What about someone caring for you in yours? How was Jesus present in those situations?

Before God and one another, are we simply the sum total of what we can contribute? Or do we have a value beyond that?