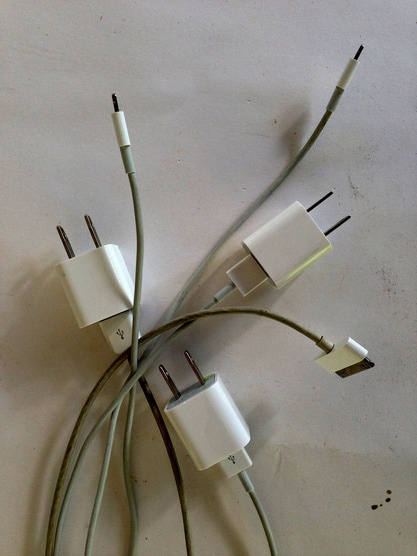 "Reese! That’s not safe. Put down the electrical cord…No. No. No…Reese, we don’t eat cords in this family…Don’t smile at me. I’m not smiling at you – until you put the cord down…Don’t look at me like that. I know you know that I know you know you’re not supposed to eat electrical cords…Put. It. Down. Now! Reese!”

For my money, one of the most deeply frustrating things about life is that we can’t really control other people. Sure we try to control others with everything from fists to fear to finances. But other people remain free to rebel against us, should they choose to do so.

During my career, I have lost track of how often someone has come to me heartbroken because a son (or a daughter or a spouse or a friend or a boss or...) continues to take drugs (or run away or hit or neglect or take advantage or...). And this person continues to do what they want to do no matter what the person talking to me does. The way we often choose to use our freedom is often sad and gut-wrenching, especially to those who love us the most.

But this freedom also enables us to truly love others and they to love us. Without the ability to control others, we have the actual possibility of loving and being loved. Love is not possible without freedom.

We are not stuffed animals or action figures that have to do what our “owners” or “playmates” want us to do. We are real people. We have a real measure of freedom. And using that freedom to share love is the greatest joy real people can know.

So, I suppose the same capacity that drove Reese to defy me with the electrical cords also created the moments when, at about that same age, she decided to slobber me with kisses unannounced.

(This was before she knew to pucker, so she’d stick her open mouth on my face or my shoulder and drool a little.)

The beginning of Genesis has God placing the first couple in a wonderful garden with good work to do, good food to eat, and good fellowship to share. There is, of course, one tree they aren’t to taste if they trust God’s wisdom and warning.

But Man and Woman still can take a taste of that tree, should they choose to do so. And, sadly, we do often choose to do so. God hasn’t made us plastic dolls, but living creatures in God’s image with the power to decide and act. Giving us this freedom is a big part of what God calls “good”.

There is that incredible image in the book of Revelation where Christ in his glory has eyes of flame, feet of bronze, and a voice like many waters. With his Niagara Falls voice the Lord says, “I am standing at the door knocking; if you hear my voice and open the door, I will come in and eat with you, and you with me.”

Think about it: Even with his mind-blowing glory the Lord isn’t kicking in the door, tying us up, and shoving his food down our throats. He is honoring us as we have been created, as people who are free and able to unlock the door and let him in (or to turn up the TV and ignore his knocking).

The wonder of God’s power is that even when the world freely chose to strike Jesus down on the cross, God’s desire to recreate the world through Christ was achieved through resurrection from death.

The wonder of God’s love is that he made a world where love is possible and will prevail, even if that meant making a world that could freely choose to break his heart.

Despite how hard it is, may we – like the Lord – choose to build our freedom into shared love instead of trying to us it to control other people who – whether we like it or not – will remain forever beyond our control.

Eyes of flame?!? Voice like a waterfall!?! That’s pretty awesome. I’ve never heard that before.

With our freedom we usually decide to fight. We often choose foolish things. We choose things that for us may seem best but aren’t best for the rest. That’s interesting in America where we actually have a big statue of freedom, a Statue of Liberty.

I think the most important part of freedom is this: Don’t abuse. Love; be kind.

One of the best things about freedom is we can imagine scenarios, make them up in our heads, and in live them out in life. Each of us can use our freedom to make ourselves our own person. Different person.

Freedom is what shapes us and makes us human. Even if we look like a loser in the world, we still have it. It’s a gift, a gift from God that makes us a little like God. What makes slavery so terrible is real people with free hearts and minds are actually treated like plastic dolls, like things other people own.

It’s true; we aren’t plastic dolls. Life is not a movie with each scene planned out beforehand down to each little step of a toe. We don’t know what’s going to come next.

I can’t believe I used to try to chew on cords. I don’t remember that. But I do remember being in Florida visiting Auntie G, and I went to touch my finger to an electrical outlet, and Uncle Gus said, “No!”

I usually don’t push my freedom when people say “no” unless it’s a really big want or need. At school sometimes I will use my freedom to stand up for people. But I have used it a couple of times to be mean to someone, though. It’s a big problem at school when people use freedom to make fun of other people.

I don’t remember the slobber kisses. I do remember learning to pucker by doing the big, loud kisses that went “MMMMMM-MMAAHHH!!!”

Yes, it’s fine that you wrote this about me.