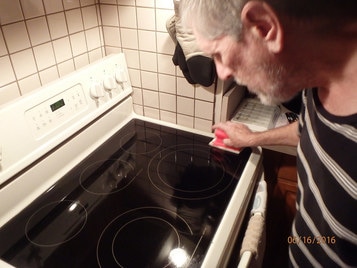 Around the house I have always been a “straightener”.

This is not to be confused with someone who is a cleaner. I’ve never been that into washing the dishes, scrubbing the toilet, mopping the floors. I can do that stuff, but it isn’t me.

“Straightening” is taking a room that is out of order, a room bordering on chaos – papers strewn about, clothes hanging on chairs, etc. – and putting it back together again. I stack, hang, rearrange…I straighten.

It’s a weird sort of calling, I guess, but it’s mine, nonetheless.

I think I inherited straightening from my father. But, when I do it well, I feel good. Often I feel glad. I think I feel a little of the satisfaction God must have felt back in the first chapters of Genesis.

Genesis says that the cosmos was formless and void, and then God starts straightening and putting things in order. A stack of Heaven is set up over here and a stack of Earth placed over there. Day is hung in its proper place beside Night. Land is gathered where it should be and Sea is placed on the correct shelf right beside it.

God’s a bit of a straightener, or so it seems. I suppose a little of that rubbed off on me.

The writer Frederick Buechner once wrote, “The place where God calls you is the place where your deep gladness and the world’s deep hunger meet.” I guess straightening has a little flavor of “deep gladness” for me.

When Reese became a toddler, this gladness met its great hunger and need.

Toddler Reese was a disorder machine. She pulled tissues out of boxes, books from shelves, food from cupboards, dolls from storage tubs – on and on it went.

I remember one day when – with great delight – Reese discovered she could throw her stacked diapers all over the room. For her, all of this was very serious and satisfying work. And, her good work did not include putting things back.

No problem. I was there ready to live out my calling in response to a situation of great need.

One night I realized that throughout the house there were eight – count them 8! – “disorder zones” created (if that is the even the right word) by the Baby Wonder. The world of our household had a deep hunger for a straightener, and I was there ready for just such a time as this.

Callings can be funny that way.

Obviously, I’m telling this to you with my tongue in cheek, but not all the way.

Everyone reading this has deep, healthy sources of connection and gladness that we often call passions. In essence, it’s when we are deeply moved by a situation, and we want so desperately to do something good for it that we feel that hope and longing in our guts.

Jesus had these compassions, of course.

Here’s an example from Matthew’s gospel. Remember as you read this, that the word “compassion” in the text has to do with “being moved in your guts”:

29 As Jesus and his disciples were leaving Jericho, a large crowd followed Jesus. 30 Two blind men were sitting by the roadside, and when they heard that Jesus was going by, they shouted, “Lord, Son of David, have mercy on us!”

31 The crowd rebuked them and told them to be quiet, but they shouted all the louder, “Lord, Son of David, have mercy on us!”

32 Jesus stopped and called them. “What do you want me to do for you?” he asked.

34 Jesus had compassion on them and touched their eyes. Immediately they received their sight and followed him.

A big part of being a Christian and following Jesus is exploring these (com)passions, focusing them in the light of Christ, and asking God’s Spirit to help us see the deep need in the world they are designed to address.

So, what does this look like for you? What are your (com)passions? Where do your gifts, talents, and gladness meet a need you feel in your gut?

These are simple questions, at least on the surface.

However, the answers we give can change everything for us.

A Reese’s Revenge from Karyssa…

I have never been a super-clean person.

But, the older I’ve gotten, the more I’ve started to like to organize things. The thing is that it never seems to end. I organize my room and like ten minutes later it’s messy again.

But the dolls have so many accessories that it can become a mess, and that can disturb me. Unless the doll is Chris or the doll is Rebecca. I know those two dolls have messy personalities.

Rebecca loves clothes and has way too many of them. And, well, Chris is just a messy boy.

Most of the other dolls like to keep things pretty neat.

Dad, I remember how sometimes you would take a day and straighten the house, especially my room. I’d go off to school, and then come home and have trouble finding stuff in my room because I had gotten used to it being messy.

It’s good not having it too messy anymore. Mom used to step on stuff in my messy room and break some of the stuff.

Yes, Dad, I do understand you are talking about something deeper than straightening rooms in this writing.

One of my passions has to do with dolls and making things for them: food, clothing, toys – that sort of thing. Last Christmas that passion met a need through Micah Ministry downtown.

I bought a doll at a thrift store, cleaned it up, gave it a new outfit and some stuff, and gave it to Micah Ministry to give to a girl who wanted a good doll but who maybe couldn’t afford to buy it.

That made me feel glad.

Dolls are important for kids. They’re almost like play therapy without a therapist. Dolls give us kids a chance to work through things, ideas, and issues. I’m glad I could provide a doll to someone else.

I also remember making sculptures of doll-sized food and giving it to the girls in my class last year. I think I ended up giving food sculptures to nine girls in all. I made a lot of pizza and desserts, and I gave them so their dolls or stuffed animals could have something to eat when they were playing.

I meant to do it for only one girl, but it kind of grew and grew, and so it became all of them, eventually. Even the girl who made fun of me sometimes. That was good.

So, I guess right now that’s my compassion meeting a need and making me glad.

I don’t know what Mom would say about herself, but I would say her passion has to do with helping people through their problems during hard times. She is so really good at that. She’s done it with me, with prisoners, with people in the churches she’s worked with.

Mom was so good talking with me and helping me through my worries when they were such a big deal for me a few years ago.

I enjoy helping people like that, but Mom has a special way of helping people. I’ve witnessed her passion for it, her abilities with it, and I hope some of it rubs off on me.

​Yes, Dad, it’s fine that you wrote this about me.