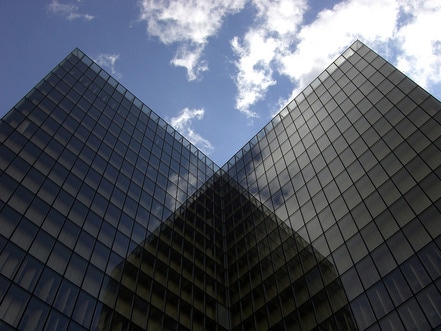 Perspective matters in life. I know that’s not a shocking revelation, but it’s something I lose track of too often.

Back when Reese was a tiny baby we were driving to the grocery store. Mindy and I were in the front with Reese in the back. It was about Reese’s bedtime, and we knew she was tired.

Suddenly this noise started coming from Reese’s seat. Reese was gargling her spit. Oh, but there was more. Reese was also speaking high-pitched “words” in her baby language through the spit.

Her spit-phonics made this weird, primal noise that was too hard for me to create myself. I didn’t even want to try. In all honesty, it wasn’t a noise I think I ever want to replicate myself. But Reese was doing it over and over again. Spit-gargle-cooing. Getting into it.

So I said to the backseat, “Reese that’s disgusting.”

At about the same moment Mindy said, “Reese, honey. Jesus loves your singing.”

Perspective matters. And, not all perspectives are created equal. In that moment it was pretty clear that I had the worst perspective in the car – third after both Mindy’s and Reese’s.

For a long stretch of time at a congregation I once served, every Sunday morning the city set up a speed trap right next to the entry into our parking lot. Every Sunday I’d pass it at seven in the morning I’d get irked. It bugged me. Sunday morning?! A speed trap at the church?! C’mon!

A friend in the congregation, not knowing my perspective, came up to me one Sunday morning and said, “Isn’t it nice the city put the ‘evil eye’ right next to us every Sunday. It’s very nice of the police to make everybody slow down at the church campus and notice we’re here. Who knows? Maybe they’ll come on in and worship.”

Perspective matters. I liked my friend’s better than mine. Still do.

For some reason I can’t remember I was reading an editorial page of Christianity Today from November 2006. The editors cited a study from the American Sociological Review entitled “Social Isolation in America”.

The study claimed that the average American had three close-confidant friends in 1985 and only two in 2004. Further, those reporting no close friends jumped from 10% to 25%. Those reporting a circle of four or five close friends slipped from 33% to around 15%. The study noted that increasingly the close friends people did have were household members and not those from the broader community.

The editorial wondered how the church, “the new community, the friends of Jesus (John 15)”, could make Jesus Christ present to a more and more lonely culture.

The editorial talked about the huge effort and money congregations have spent on programs propelled by slick marketing, creating “authentic” high-tech worship services, or seeking to relate the gospel to a postmodern culture.

What if, they wondered, there was a perspective shift?

What if each member pledge to become a good friend who listened and cared to new people just because it was an extension of Jesus’ call to love God and love neighbor?

How would that type of perspective shift refocus the way we looked at ministry, at being a Christian?

I suppose allowing our perspectives to shift in important ways is simply part of being alive. And, as much as it pains me when my old, cherished perspectives prove unhelpful, I much prefer being alive to the alternative.

Perspective does matter. It’s a lot of what makes up your personality.

It’s like that old saying about the glass being half-empty or half-full. Your perspective makes you look at something one way and not another, and this makes your personality.

With the glass, a balance is what we’re supposed to have. Sometimes it is best to see it as half-full and other times half-empty. But we’re usually a little out of balance.

Why do you think we have a government with 500 people in just one branch? We have a democracy with different perspectives working together, and when they unite around something or someone, it’s much better than one perspective alone.

Even when I’m alone and working on something by myself, I like to talk to my self like there are other people around. Usually I’m telling stories with different characters and voices and perspectives. I do it when I’m doing chores, like when I was deadheading the rose bush.

I don’t remember the spit-gargle-singing from when I was a baby. But, I’m not surprised. I’m still good at gargling spit. I’ve always had a lot of saliva.

If I – the way I am now – where in the car back then with you and mom and baby me, I’d have agreed with your perspective, Dad. A lot of baby noises, especially screeching, sound like doomsday to me. Annoying. Or disgusting.

I do think that people are often lonely today. The Church can welcome them in. Our church tries to do that when we welcome in people who don’t have some of the main necessities. Without those necessities, it can be isolating, and you can get lonely. When you have them, it is easier to be a part of the community. Less shame.

And – think about it – Jesus rarely preached inside. He was outside a lot, in God’s church, the outside. God did call nature “good”, after all.

But Jesus did make friends with people, with strangers. He had his disciples. Why not pledge to make new friends because of Jesus?

But love is a necessity. We can be afraid to love because we fear we’ll lose somebody we love, but love is what makes us human. We shouldn’t avoid love just because we might lose someone.