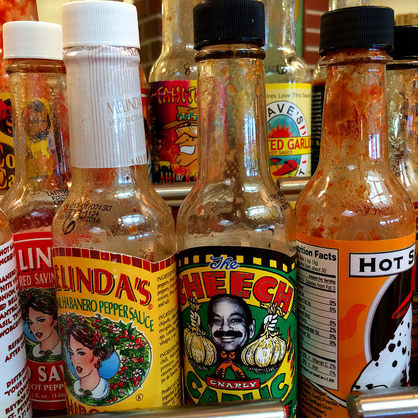 Reese is tricky to feed. She always has been. She is a child who actually does not like (and has not ever liked) hamburgers or hot dogs. Thankfully, she’ll still go for pizza. But it has to be cheese and nothing else. Oh well. There are worse things than avoiding hot dogs. Or pepperoni, for that matter.

But Reese used to be easier with this type of thing. Back when Reese was a baby just getting into solid food, I remember taking her to a taco place while on a trip to Nashville, Tennessee. When the tacos arrived at our table Reese got wild, but in a fun way. Bouncing. Grunting. Smacking her lips. Gesturing wildly. Waving her arms.

I gave her a tomato from my taco and she loved it. But a few moments later I accidentally gave Reese a tomato from my hot salsa. She went red-faced and started to cry. I was tired and distracted and probably had an eye on whatever was up on the TV, but that was no excuse. How could I have done this to her?

Not sufficiently cured of my negligence, and once again distracted, a few minutes later I gave Reese a spoon of my re-fried beans…which I’d forgotten to blow on. This was even worse.

Sitting in her highchair, Reese let out a yelp of enraged pain and stuck out her tongue. I scraped the hot beans off with my finger. It was terrible. How could I hurt her so stupidly – twice – within five minutes?

But Reese didn’t hold it against me. Once the pain was past and the apologies poured out (not that she understood all the words, of course), she accepted food from my hand like nothing had happened.

It is an amazing and foolish love children invest in us flawed adults.

After the meal was over, I found myself thinking of Jesus’ words in Luke 11 about how loving parents obviously don’t offer scorpions when asked by their children for eggs.

Now I love my daughter desperately, but through inattention I had given Reese two “scorpion stings” in five minutes when all she wanted was a little taste of something good.

How often do we do to each to other what I did to Reese? Now I’m not just talking about parents and small children, or about tomatoes and re-fried beans.

When we do hurt people like this, how often do we recognize it, repent, and seek to make amends?

When I repented, baby Reese let me off the hook. I was reminded of the First Letter of John in the New Testament when, talking of God’s forgiveness known in Jesus, the author writes, “If we confess our sins, he who is faithful and just will forgive us….”

In the gospel of Luke, Jesus looks down from the cross and asks forgiveness for those assembled under his feet because they didn’t know what they were doing when they crucified him. I have no doubt his prayer was answered.

Not knowing what I was doing, I’d jammed piping hot beans into Reese’s mouth, but she forgave me quickly, completely. Who knew my baby could act like the Lord?

I hope I’m as able to forgive when I get a mouthful of molten beans from someone I care about.

I have always been a picky eater. I still am. You know, I don’t think I’ve ever tried turkey. Don’t plan to.

I know me being a picky eater can drive people nuts. I know this. But people still feed me. So, I’m still alive. I guess it’s a way of showing they care…Now I’m just sounding dumb…

Kids, even more than adults, need to learn how to forgive because adults mess up more than kids. Adults need more forgiveness. But it’s tempting not to forgive.

It’s hard to ignore the devil’s voice, to ignore temptation, especially when the voice is telling you not to forgive. We’re not as good as Jesus at ignoring it.

It’s like the devil’s voice can seep into where you hairs stick out. (‘Follicles’, yes, that’s the word.) It can seep in and get all up in your brain and then come out in your words and actions.

Yes, I know that sounds kind of gross, but that’s the image I have.

It’s just hard to forgive. I’ve held grudges – weird ones – for years. And it’s never easy to give them up, but eventually I have to say, “Hanging on to this is a mistake.”

In your writing about being with me in Nashville, I was too young to describe forgiveness, but I was still able to flow with it. I’m happy with my younger self about that.

As a society we need to practice more forgiveness to be comfortable and secure. Without doing that, we’ll drop anchor, and we’ll stay stuck.

“You are forgiven,” are some of the hardest words to say, especially when someone doesn’t say, “I’m sorry.” It’s not hard to roll the words ‘you are forgiven’ out of your mouth; it’s hard to mean the words.

It’s hard to mean the words, pick up the anchor, and flow.

But, when we do, we often give the other person the strength they need to say, “I’m sorry.”

​And that is better for everyone.